We’ve probably all heard of Newton and his discovery of gravity. Throw an apple up in the air and it will decelerate and then fall back to Earth. However, treating gravity as a force is only good to a limited extent, because that’s not entirely accurate to what gravity is. So then what is gravity? What is LIGO and how does it work? Well that’s exactly what this article is about.

In the early 20th century a physicist named Albert Einstein, who you may or may not have heard of, came up with a theory that changed the way physicists looked at gravity. Before, astronomers were having difficulties explaining certain observations like Mercury’s orbit around the Sun. When normal Newtonian-physics and mathematics was applied to Mercury, it’s orbit made no-sense with what had already been observed and measured by telescopes. What could explain this? Scientists first thought that maybe there was another planet that was in orbit around the Sun that was pulling on Mercury. After all, the same thing had happened with Uranus when we realized that another planet, Neptune, was pulling on its orbit. The problem was, they couldn’t find the planet and began assuming that there was a planet there but the Sun was just too bright to see it. They named this mystery planet Vulcan and it was thought to be there up until the early 20th century. Albert Einstein had published a theory that would later be called “The General Theory of Relativity.” Einstein imagined that if all the mass in the Universe was taken away, space would be a two-dimensional sheet. If you were to then put mass back onto that sheet, called a manifold, it would bend the manifold of space itself. This bending is the reason the Earth orbits the Sun and the Moon orbits the Earth. When astronomers took the General Theory of Relativity’s math and applied it to Mercury’s orbit, the planet Vulcan disappeared in a second and Mercury’s orbit now made sense. 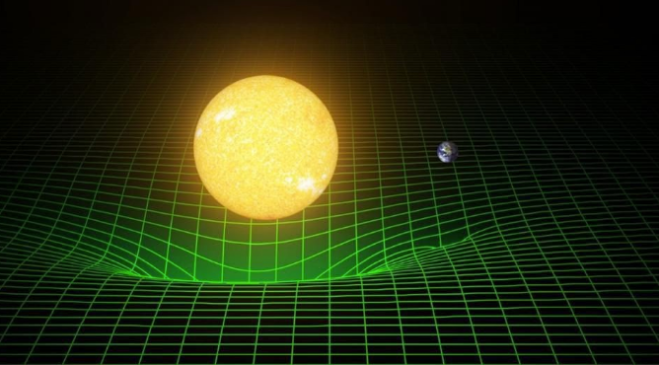 The manifold of space-time and how the Sun and Earth affect it.

Part of Einstein’s General Theory of Relativity, the man imagined what would happen if large masses collided with each other and realized that it would form waves in the manifold of space-time much like a stone creates ripples when thrown into water. These would later be called gravitational waves. These gravitational waves actually stretch and move the Earth when hit however it only affects Earth by smaller than the size of an atom so it’s not very noticeable. That is, until LIGO was built.

In the mid-1980’s, funding and building began of a joint project by MIT (Massachusetts Institute of Technology) and Caltech (California Institute of Technology.) This project, named the Laser Interferometer Gravitational-wave Observatory (or LIGO for short), would be created for the sole purpose of detecting Gravitational-waves. The observatory works by creating a laser beam that comes into contact with a lens that splits it in two and shoots them at 90° from each other. Those two beams then travel through two, evacuated, 4 km steel tubes and reflect off mirrors at the end of it. Finally those laser beams travel back to their starting point and converge again. This convergence causes a light pattern to be created on an adjacent wall. When gravitational waves hit the Earth it causes interference in the laser beams and this changes the light pattern. The problem is that any vibration could cause an interference pattern. So, they had to build it in a rural area away from cars and in an area with a low-amount of earthquakes. To make sure that no vibration could lead them to a false conclusion, they built two separate observatories in Hanford, Washington and Livingston, Louisiana. Has all this hard work paid off? Yeah. On September 14, 2015 both observatories detected an interference pattern and were able to correlate it with a collision of two, large, black holes. The fellows at Caltech and MIT even created an audible sound that would be what that collision would sound like if there were air. You can search it up on the internet and listen to it. One of the ends of the LIGO facility.

So, ultimately, the importance of LIGO has already been revealed. It will continue “listening” for gravitational waves and the folks at Caltech and MIT hope to detect the collisions of objects like neutron stars and other black hole collisions. It’s just astounding the feats of science humanity has achieved. Just a few hundred years ago, astronomers were barely being able to see Saturn’s rings and now we can detect massive black hole collisions that take place lightyears away.