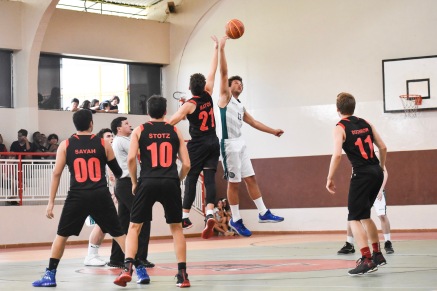 This event was covered by photographers Ashika Das, Yuqiao Song, Alma Sato, Joanne Nchimbi, and Sherlynn Chew. All photos were edited by Yuqiao Song. To see more from these photographers follow eab.moments on Instagram.

For the first game of Bulls Invitational EAB played against PACA. The starters for this game where are Hendrik Stotz, Diogo Matos, Lucas Dalva, Ryan Sayah and Andre Parola making for a great team to begin the Bulls Invitational! EAB started off extremely strong with Andre Parola scoring the first basket of the game. In the first half of the game EAB scored 18 points while PACA scored 20. In the end EAB won 33-31.

In the Bulls’ second game of the day against EARJ they sadly weren’t able to secure another win. EARJ started off strong and were able to gain a lead of 9 points by the end of the first half, leaving the score at 13-4. Our team had time to regroup and focus more in the second half, in which they scored close to 3 times as many points as they scored in the first half. Unfortunately, this wasn’t enough for the Bulls to win. EARJ won 28-17

EAB was able to redeem themselves, after their loss on the previous day! EAB played against Renata Ribeiro; throughout the game EAB consistently played better and their passes were amazing! The other team struggled to catch up with EAB, as the Bulls demonstrated themselves to be very focused and strong. With that, EAB proved they were the stronger team, and won 48 to 33.

What an intense match! Fresh off their first victory of the day the Bulls came in motivated to win. With great ball handling and offense the Bulls were able to bring the score to 19-12 by the end of the first half. However, the match became more difficult after two of their starters fouled out and one starter couldn’t play due to an injury sustained the prior day. The game quickly became a back and forth for points just to stay in the lead. With EAB ahead by three points, at the end of the second half PACA scored a last second three-pointer which tied the game, sending them into overtime. Both teams tried their hardest in overtime but PACA was able to secure the win 49-47.